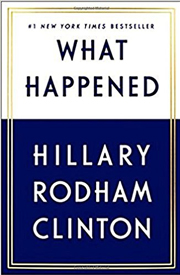 We have all read LOADS of information regarding the 2016 Presidential Election at this point, what else is there to learn and discover?

How about hearing the first hand account of her trials and tribulations from Hillary Rodham Clinton herself?

“This is not okay, I thought,” Clinton said, reading from her book. “It was the second presidential debate and Donald Trump was looming behind me. Two days before, the world heard him brag about groping women. Now we were on a small stage and no matter where I walked, he followed me closely, staring at me, making faces.

“It was incredibly uncomfortable. He was literally breathing down my neck. My skin crawled. It was one of those moments where you wish you could hit pause and ask everyone watching, ‘Well, what would you do?’ Do you stay calm, keep smiling and carry on as if he weren’t repeatedly invading your space? Or do you turn, look him in the eye and say loudly and clearly, ‘Back up, you creep. Get away from me. I know you love to intimidate women, but you can’t intimidate me, so back up.’”

This sounds pretty monumental, especially regarding how closed off the former First Lady has been since her loss to the egomaniac/monster/nasty-man some people call our president. I do not doubt this memoir will be informative in its recounting of all the major steps leading to the eventual outcome. I expect some horror in the text too, as Hillary had to contend with a terrible, horrible man who is a lot like Frankenstein’s monster. I also expect it to be super damn entertaining. You cannot be the person who had to run against Trump and not have some insane stories. As someone who had to debate against Trump, I’m sure she has a lot to say about everything that happened then and everything that has happened since.