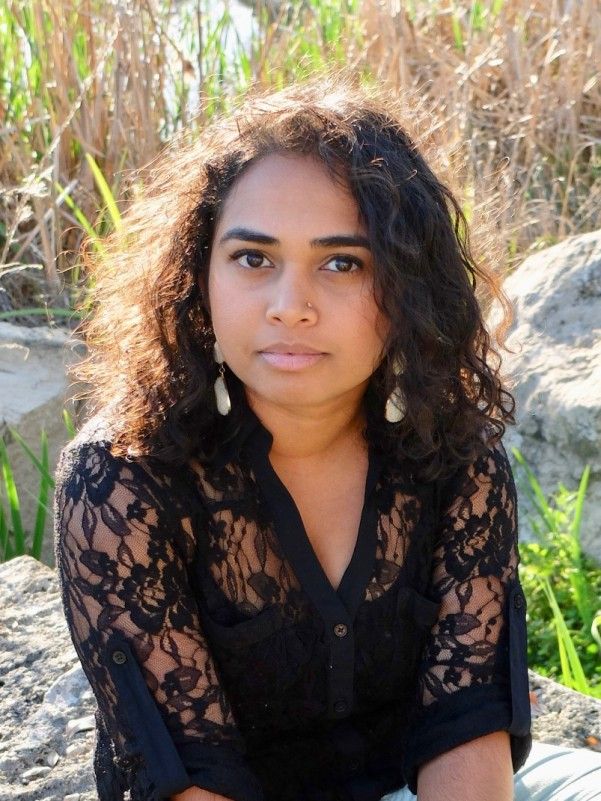 From the book jacket: “My parents are the kind of people who talk politics but never mention gay marriage, who watch the news but change the channel at the mention of gayness. Shame, dishonor, embarrassment. Five hundred Sri Lankan Tamil families in the greater Boston area, and not one of them has a gay kid…”

S.J. SINDU: Tim O’Brien’s The Things They Carried was the book that made me want to be a writer. I read it in high school, and for the first time, I realized that I didn’t have to write fantasy or sci-fi (which is all I wrote before that). I lived the first half of my childhood in a war zone, and for the first time, I saw the cruelties I’d known as a young child reflected on the page. I don’t know why it had never occurred to me to write about my own experiences before, but O’Brien’s book was the beginning of me having that realization.

IBB: When you say you lived the “first half of my childhood in a war zone” do you mean an actual war zone? How was your war zone related or parallel to what O’Brien writes about in his book of short stories about soldiers in the Vietnam War?

S.J.S.: Yes, an actual war zone. I was born in Sri Lanka during the civil war (1983-2009) and lived there until I was seven. We lived in the northern regions, where a lot of the fighting was. Some of my earliest memories are of sitting in dug out bomb shelters, and fleeing our house on foot as the fighting intensified. Of course, he’s writing war stories as a soldier, and mine were experienced as a civilian child, but there’s a way in which the horrors of war become normalized that is consistent across O’Brien’s and my work.

IBB: You mentioned your early writing was sci-fi and fantasy. Many writers often begin writing sci-fi or fantasy, and for POC or marginalized writers, it’s often a way to approach the serious issues marginalized folx face, making them palatable or visible to a wider audience. Could you discuss your early attraction to sci-fi and fantasy? Do you imagine returning to those genres?

S.J.S.: I think my early attraction had a lot to do with escapism. I was a weird brown immigrant child with few friends in a foreign world, and I didn’t even know English. So I started out watching shows like Sailor Moon, Dragon Ball Z, and Bewitched! When my English improved, I started reading voraciously. I was really into Harry Potter, which like many sci-fi and fantasy worlds had in-world allegories for real-world issues like racism. A lot of my early writing was fantasy but I grew tired of indirectly dealing with these issues. I wanted to take racism, misogyny, and heterosexism head-on. But I do hope to return to these genres eventually. I’m actually working on a fantasy novel now.

IBB: Marriage of a Thousand Lies started as a short story. Was the realization that you had a novel in that short story daunting, exciting, or baffling?

S.J.S.: It was all of those things. It was actually well timed. I wrote the short story in the summer, and in the fall I was due to take a novel workshop, so I was quite thrilled when I realized I had a novel on my hands.

IBB: You mention in another interview that writing Marriage of a Thousand Lies was emotionally challenging, that it haunted you and it took a while to shake it off. Can you talk a little about what writing a novel is like for you as opposed to writing a short story?

S.J.S.: It’s a different work ethic for me. With a short story, I rarely have a plan (as in, a writing process plan). I don’t have a set number of words I want to hit a day or a number of hours I want to work on it per day. I just work on it on and off as it comes to me, and it does take me a while to write. I know people who write a short story in a week or a month. For me, it’s about six months to a year for one short story. I need to let it rest between drafts.

For a novel it’s a different story. A novel takes a lot more planning on my part, to fit it into my life. In the initial drafting of new material, I like to hit 500 words a day. I set deadlines for finishing each draft. On the whole, I work a lot faster and looser with a novel, saving the fine-tuning for later stages. I also really like using a program like Scrivener for novel drafting, because it separates the novel into scenes and chapters and it’s easy to move things around. For short stories I usually just write them in Word.

IBB: Please share a passage from your book that you are either particularly proud of or that was particularly hard-won.

S.J.S.: This particular description of the closet is something I’m very proud of, but it was a late addition right before publication. Straight readers who often had a very simplified idea of the closet and its implications and it frustrated me. The following was written in response. I also love the fact that this is the only co-written passage, and I want to give credit to my spouse, Geoff Bouvier (a poet), for helping me write this:

“Most people think the closet is a small room. They think you can touch the walls, touch the door, turn the handle, and walk free. But when you’re inside it, the closet is vast. No walls, no door, just empty darkness stretching the length of the world.”

IBB: I don’t know if you’ve heard about the Clifton StrengthsFinder (CSF). It’s a personnel tool to help employees come up with their five “signature themes.” Using the CSF as a guide, identify the “signature themes” of Marriage of a Thousand Lies.

S.J.S.: Oh wow I didn’t know about this! I don’t even think I need to take the test to identify some of mine (Context…so much context…it’s like all I do). But as far as the novel, I’d say: Family vs. the individual, belonging, the body, sexuality, and flawed love.

IBB: If there were a mix tape for Marriage of a Thousand Lies, what might be included?

S.J.S.: I love this question!
“Driving North” and “3 a.m.” by Chris Pureka
“Forever’s Song” and “Daughterson” by Coyote Grace.
“Romeo and Juliet” but the cover by Indigo Girls. Their version damn near breaks your heart.

IBB: What are the top three reviews of your book that you particularly appreciate?

S.J.S.: The Aerogram is a South Asian culture magazine, and they did a fantastic, nuanced review that is unlike any of the others. Autostraddle is a lifestyle blog for queer women. They also did a fantastic long-form review that teased out a lot of the deeper issues in the novel. The Lambda Literary reviewer brought a particular expertise to the table and acted as a guide past the superficial layer of the book.

IBB: Since you were a former resident of Lincoln, I need to ask: Runza or cinnamon roll and chili?

S.J.S.: This is tough. I gotta say the steak and egg burrito from D’Leon’s.

IBB: We are so looking forward to your reading. Any parting comments?

S.J.S.: I haven’t seen or been to Lincoln in five years. It’s very much a homecoming for me. I was in Lincoln when Indigo Bridge opened, and I used to haunt its aisles so I’m over the moon that I get to read there now.